It's beginning to look like college application time!
Everywhere teachers go
Is a senior with an app, and an activity sheet to adapt
To a recommendation that makes that student glow. 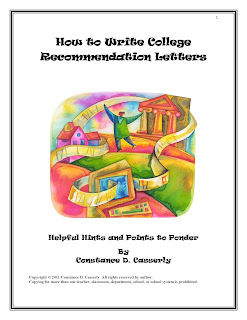 High school teachers, are you in hiding yet? No, not from administrators in search of your yearly objectives, parents with daily requests for  Bubba and Zelda’s progress in your classes, or students bearing glossy order catalogs for yet another fundraiser, but from seniors-specifically seniors seeking the November 1st deadline for early admissions.

Oh, don’t forget about those searching for a college with a January deadline or one with rolling admissions – they’ll be ba-a-a-ack for your recommendation that they are sure will guarantee them admission to post high school, academia, but that’s then…not now.

Right now you are staring at papers to grade, plans to prepare, parent night and maybe even midterms. On top of all of that, you already have said, “Okay,” to writing recommendation letters for a dozen students who admission committees will deem anywhere from, “Yes!” to, “Hmmm. Let’s talk about this one” to, “No. Not for us.”

Writing recommendation letters is a daunting professional task, no matter whether a student has demonstrated superior, above average or average capabilities.  A concise and precise letter that addresses a specific senior’s academic, athletic, extracurricular and community strengths in a way that allows that person to stand out from other equally capable applicants is a stressful  experience.

My product, Recommendations – How to Write Recommendation Letters for College Applications, will benefit all of you still leading classrooms- from veterans who desire another option in your repertoire to new hires who have never written a college recommendation. Included in this packet are
Qualities to Address

What Each Recommendation Should  Include


What Each Recommendation Letter Should Avoid

Letter Format:
Note: The examples in this section are from a letter for an above average student; for all of the letters, I changed the name to the generic John Doe/Jane Doe to protect every
student’s privacy; I also changed the names of anything to do with my school to Blank.
Heading:
To: Dean of Admissions: Yale University
From: Constance Casserly, English Teacher:  Blank High School
Re: John C. Doe (his social security number might be required)
Date: September 22, 2015
Introductory paragraph:
·         Hook
·         Course(s) taught (Point A)
·         Transition sentence addressing the student’s academic/thinking skills
Example:
“One of the most enjoyable aspects of teaching is to encounter a student whose academic abilities, motivation and innovative thinking are so apparent that the young person will never be forgotten. John Doe is such a brilliant star.  He has been a stellar member of the Creative Writing 1, 2, 3 classes since he was a freshman, and is taking the course this year without credit just to hone his writing skills.

Because of his leadership abilities, his writing prowess and his attention to detail, last year’s staff and I chose him as the Editor-in-Chief of the 2016 edition of Blank, the high school’s literary and art magazine. Consistently, John displays the kind of original thinking, initiative and curiosity that I wish every student possessed.”
Body Paragraph(s):
These can vary from one to four. Just keep the whole letter, including the closing and your signature to one page. (Points B and C)
Example:
“This young man’s divergent thinking skills run the gamut from the concrete to the creative. The slant he takes in his writing reveals his remarkably mature and innovative thought processes, while his work remains insightful, logical and fluent. John can ascertain the subtle nuances of human thought and behavior which he then transposes to his pieces with an astute inner eye. Whether he is mimicking James Joyce’s stream-of-consciousness style or crafting a political thriller, his pieces reveal realistic, dynamic characters, believable plots, suspense and depth.

During writing analysis sessions, he cogently discusses his thoughts on his work and that of his peers. The high standards that John sets for himself are revealed every time he asks for clarification on critique comments. By not being afraid to question his opinions or those of others, he demonstrates a powerful desire to learn. His emotional maturity commands respect and allows him the freedom to openly demonstrate his flexibility and acceptance of a wide range of people and ideas. John’s writing, which is cerebral and compelling, is a rare gift. Considering the many talented students I have encountered in my two-plus decades of teaching writing, he ranks alongside only a half dozen in regard to his creative flair and his ambition to succeed as a published writer.”
Concluding  Paragraph:
·         Recap student’s strengths
·         Final thought
Example:
“John’s strong drive, combined with his quiet yet congenial nature, makes him a joy to be around. With absolutely no reservations, I recommend him for acceptance to CU Boulder. This talented young man is sure to surmount any challenges you offer him with diligence, perseverance and intelligence.”
Closing:
Sincerely,
(Space for signature)
Type your full name 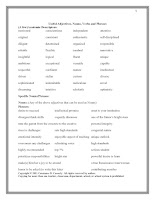 Also included in this packet is a list of adjectives and phrases to guide teachers though the process. At the end of this offering are three sample letters to show how all of these points can be meshed into a cohesive letter: one each for superior, above average and average students.

Hopefully, Recommendations: How to Write Recommendation Letters for College Applications  will ease your qualms when one of your seniors asks, “Could you please, please write me a recommendation letter?”

It's beginning to look like college application time!
But secondary teachers all know
This packet will help them express, their thoughts with such finesse
That their recommendation will make each student glow.