What’s Love Got to Do with It?

The past two Valentine’s Days I haven’t spent in a classroom and I have been feeling a bit off because of it. Considering that this day where Cupid is King is harder to teach than the first day of school, harder to keep the kids on task than the day before any long break and even harder to quell the chaos than the last day of school, I’ve had to ask myself, “Why?”.
Did I miss the normal teenage hormone-infused highs fueled by a day-long dose of chocolate? Did I miss the kids skidding into the classroom in a tangle of heart-shaped balloons, stuffed animals and red roses just as the tardy bell rang? Did I miss all of the “Happy Valentine’s Day, Mrs. C.” wishes accompanied by a few Hershey’s kisses surreptitiously slipped onto my desk or the Godiva Chocolate Raspberry Bar handed to me with a flourish and a shy grin? No, no, and no.
Well, maybe the chocolate.
I realized that on this day where love was supposed to permeate every wisp of air, my memory banks chose to play and replay the faces of so many sad-eyed, somber-spirited teenagers who rarely felt loved or loveable on any given day. And they haunted me.
I thought of David, whose father held him captive in his home at gunpoint during a hostage situation, the result of a custody battle. He escaped unharmed, physically but spent a year in the institution for emotionally disturbed adolescents, where I was teaching, after his mother abandoned him when she took off with hubby number two.  I thought of beautiful Kara, a fragile blond ballerina who told me that she was tested for aids once a month because of her propensity for dating much older men in her quest to find someone to love her. I thought of Julio, a former gangbanger who hid his fear of his peers still involved in gangs behind a wall of arrogance and a sneer of disdain.
And I was reminded of Jennifer, the catalyst for my book on teen dating abuse, A Fine Line, who slipped into my room, her black and blue bruised arms hidden under a jacket until the steamy June day forced her to take it off. “My boyfriend and I had a fight,” she whispered in answer to my question, “Good heavens, Jennifer, what happened?” And then she murmured five words that broke my heart, “But it was my fault.”
These are just a few examples of the many kids I grew to know who dreaded Valentine’s Day more than they feared the disappointment in the eyes of their parents when their SAT scores weren’t as high as expected, who became totally engrossed in the difficult syntax of Franz Kafka’s sentences in The Metamorphosis every time another balloon bounced by their desks, or who feigned sleep when the bag of Candygrams were delivered to my room for me to hand out to those teens who enjoyed a BFF or two, or three..
Today, I was once again reminded that teaching is not just about turning students on to the love of learning, whatever the class. It also means giving up part of a free period to listen, just listen, to a detailed account about the loss of a once Best Friend Forever, or of Mr./Ms. Right. It means offering welcoming smiles to every young person, even…especially those who offered only discourteous defenses in return because they expected to be ignored, since they usually were. It means nagging and pushing and challenging students to try, try, try until they finally achieve even a modicum of success, but a megadose of “Yes, I can.”
Most importantly, it means finding the “Me Nobody Knows” buried inside all young people and making sure that they feel loved and loveable by accepting their weaknesses as well as their strengths, thereby taking the lonely sting out of not only Valentine’s Day, but their every day.
What’s love got to do with it? Everything. For every student. Every day.
Best,

NOTE: Here are a few activities to turn students from the "Me Nobody Knows" to the "Me You Know and can Reach to Teach". 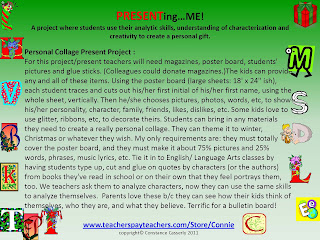 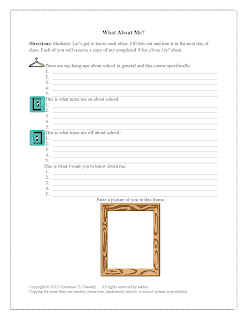 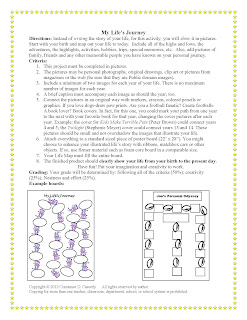 Posted by Connie at 11:57:00 AM
Email ThisBlogThis!Share to TwitterShare to FacebookShare to Pinterest