The Trouble with Troublesome Words


Once upon a time, grading students essays led to many gray hairs sprouting from English teachers' heads. After all, they had to not only read the students thoughts, analyses and interpretations, but also critique the papers for sentence structure, grammar, word choice, spelling and punctuation. Headache-causing? Sometimes. but, ah, those were the good old days!

Now...now teachers have to assess students' writing for all of the above and to see if Johnny and Jane will earn  proficient ratings on the state's standardized test as well as meet the teacher's Common Core benchmarks chosen for the assignment's objectives. A few gray hairs are minor compared to the stress overload teachers face today with calls for data that analyzes every assessment.

If only Johnny could give evidence for his assertions; if only Jane could remember to use end punctuation; if only Bubba could state his thoughts clearly, and, if only Zelda could figure out the correct usage for affect and effect, amount and number and emigrated and immigrated...just to name a few words that cause her trouble.

Compared to all the writing concerns racing through ELA teachers' minds, aren't these words that students confuse so often just a minor blip on the testing radar? Not really. Say Zelda was writing about mob mentality issues in  Arthur Miller's The Crucible on a standardized test and stated, "Abigail's antics effected the adults in the town as well as her friends to such an extent that the amount of her supporters grew with every allusion that she pretended to see."

Chances are, the erroneous use of effect, amount and allusion instead of affect, number and illusion would smack the writing scorer in the brain hard enough to leave a bruise. A headache would tag along with the contusion and both would raise an, "Oh oh, this student cannot write very well" red flag. From that point on, the reader would be looking to hone in on wrong word usage, blinding her to the analytic worthiness of the details that Zelda chose to support her assertion.

Teaching students to write right is difficult enough considering essay format and sentence structure alone. Helping students to learn the differences between troubling words like lie/lay, bring/take and discover/invent,  is an easy way to empower them to make correct word choices in their writing and lessen the chance of red flags. After mastering the meaning and usage of these troublesome words, minor issues won't become major markdowns on the writing score sheet-a boon instead of a bane for the student writers, the teachers and anyone stressed about AYP.

When teachers incorporate the material in the Troublesome Words PowerPoint that accompanies this blog, they will safeguard their students from minor red flags that could result in major unwanted attention in their students' writing.

The PowerPoint includes four word lists, each with a practice exercise and then a 30 point quiz for each list. The sixteen slides in this show review the usage of words such as affect/effect, lie/lay, further/farther and many more. This offering also contains an answer key for the practices and one for the quizzes.

Following each word list is a practice session. These exercises as well as the quizzes use the characters: Mrs. Hardcase, an English teacher, Dave Demittis (Demented Dave) the principal, and students: Bubba, Zelda and Bertha in a variety of escapades. They are the same characters that I created and use in my SAT Word Lists (also posted in my TpT store). Students have always enjoyed their teenage antics.

If you prefer not to use this product as a PowerPoint, print it off (using the Full-Page option) after you download it, so students have a hard copy to use for this word study..
You need these lessons to save your sanity when reading essays that use rise when the writers means raise, for example, and any time they mix-up these Troublesome Words.  Enjoy. 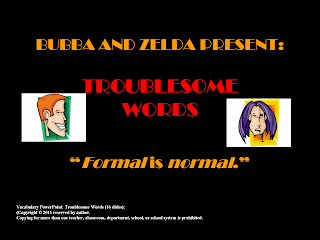 http://www.teacherspayteachers.com/Product/Vocabulary-PowerPoint-Troublesome-Words $
Posted by Connie at 1:55:00 PM
Email ThisBlogThis!Share to TwitterShare to FacebookShare to Pinterest