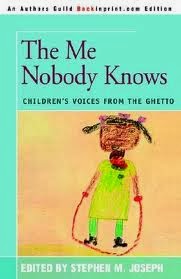 Recently, Kim T, a teacher, posted a request in a NCTE LinkedIn group for ideas that she could use with her urban students who hate to write. Kim is trying to morph her charges from reluctant writers to authors eager to do the keyboard dance, or to put pen to paper. Her plight reminds me of my first teaching experience in a boys reform school. Like her, four+ decades ago, I also faced adolescents who were below average in academic skills but highly proficient in their animosity for writing.

My lifesaver for reaching the students in my care who were loath to learning came in a blurb about a book, The Me Nobody Knows, by Stephen Joseph, a New York City public school teacher. I found it in a student newsletter from Scholastic- Scholastic Scope or Scholastic Action?  After so many years, I can’t remember which periodical it was.  What remains important is the fact that this book, a compilation of essays Mr. Joseph collected from his poverty-stricken inner-city students who exuded anger and alienation from the world around them, opened my eyes to a way I could empower my equally alienated students to want to write.

And write they did. Joe explained how he never had a meaningful male role model in his essay on fathers when he said, “How could I respect someone who only came around to take my Mama’s money on Welfare check day?”

William, AKA Cool, purportedly the most street-smart boy in the program, actually cried when he wrote about his fears for the day the courts would return him to the streets. “I’ve changed since I’ve been here. But the boys on the street would rather see me dead than changed.”

How can this book, one that was turned into a Broadway rock-musical which won an Obie in 1970, a book over 50 years old, be a catalyst for reluctant writers today?

Because all teenagers-no matter their economic, geographic or social backgrounds-wrap their anger, their angst, their sorrows and apprehensions in thin cloaks of hope and optimism.

Because prompts written by adults more interested in how kids write than what they write don’t offer the necessary emotional hook. They will never cause students to cry, “Oh, please. Let me write.”

Because adolescents need to experience the catharsis that comes from writing from the heart- from the “me nobody knows but I wish they did”.

Like the teens whose work appears in this book, all adolescents love to


Hmm, don’t these goals match up with any basic writing program? I think so. That’s why books like The Me Nobody Knows are relevant and viable in today’s standards-based schools. Be they follow Common Core or state mandated writing programs, teachers don’t have to be concerned that topics like those offered in this essay compilation will only lead only to personal narratives.

After Contemporary Joe expresses his anger for the lack of a strong father figure in his life, his teacher could lead him to research and write about programs in his area that addresses this need. Maybe Contemporary Joe won’t find one that he feels is realistic. In that case his teacher may then guide him to use his research to create one that he feels is workable, one which he can present to community officials.

Today’s Coolest guy on campus could compare and contrast his experiences with peers (and adults) who fear change with a few characters from stories he has read. He might want to write an argument on why some people find change so hard to accept, with factual research to support his points.

No matter how often students shove away anyone who tries to scratch the surface of their protective shields, and who might repudiate any assignment that smacks of writing, every adolescent desires the chance to show the world, the “me I want you to know”. 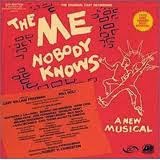 Many teachers have compiled books that showcase their students' writing. If you cannot find them, check out Amazon.com for The Me Nobody Knows: Children's Voices from the Ghetto by Stephen Joseph. The writers that Joseph included in his book are probably in their 6th decade today. That won't matter to todays' youth. The thoughts in these young writers hearts are timeless and universal. Any adolescent will identify with their writing.

I say this because Joseph's book remained a prime resource for me in my 30+ years of teaching, from the first two years when I taught in the reform school to the almost three decades that I led a classroom in suburban schools. In all of these academic venues, the adolescent voices in this book spoke to my students who came from all types of economic and geographic environments, and who revealed academic skills from below average to highly proficient.

As for how this type of narrative writing will lead to standards proficiency, given time and opportunity, the what will always lead to the how. As William Forrester said in Finding Forrester, and I paraphrase, “First write from the heart- then from the head.”

Maybe your compilation of your students’ writing will become this generation’s, The Me Nobody Knows.

NOTE: If you choose to purchase this book, make sure that you buy The Me Nobody Knows by Stephen Joseph.

Posted by Connie at 11:03:00 AM
Email ThisBlogThis!Share to TwitterShare to FacebookShare to Pinterest