Prepositions are Talkin' about RELATIONSHIPS!

Zelda and Bubba, my imaginary spokes-students for everything writing, grammar and vocabulary, recently overheard a conversation between two of their fictional peers, George and Bertha, that they shared with me. As they were settling into their seats in 6th period  English 12 that day, George sidled his chair closer to Bertha's and whispered, "Do you want me to stop by tonight?"

Zelda quickly texted Bubba, who sat behind his football pal, "G shld lrn how2 txt. He cant whisper." Always curious to see how George's obsession with Bertha was progressing, Zelda leaned back in her chair to listen. "Mom's making me weed the front garden. I'll just sprinkle some mulch around and you can come over after," she said. Zelda cringed as Bertha's fake giggle rolled into her ears. Her former friend's saccharine voice just made her skin itch like a virulent case of poison ivy.

Just as the late bell clanged, Bubba texted her back, "LOL. Same 4 B. Were they zzzing during Mrs. C's pp lessons?" Zelda responded with a smiley face and then slipped her phone into her jeans pocket before the teacher confiscated it. All around her she heard the soft dings of Sleep mode as her classmates did the same.

Bertha might be Zelda's nemesis, but when correcting student writing, the use of a Prepositions without an object was one of mine. Without fail, every year it made my Top Three Writing Headaches list. Because these words can wear so many parts of speech hats, students often misuse them.  Take the word by, for instance.

It can be used as a preposition like in George's sentence which should have read, "Do you want me to stop by your house tonight?" Maybe George meant to say, "Your house is close by my work. I can drive there when my shift is over." In these cases, by and over are adverbs (showing where). To confuse students even more, both of these words can act as adjectives and nouns, too. Talk about jacks of all trades!

We teachers understand that Prepositional Phrases (Preposition +  N or Pro {the object of the preposition}), as a unit, perform the same duties as adverbs when they address the questions: How, when, where, why or to what extent. When they act as adjectives, they show which one, what kind or how many.

How, then, are students to discern the difference of a word used as a preposition or as an adverb, adjective or noun? A Preposition shows a Relationship between itself and a noun or pronoun, i.e. by your house. An adverb or adjective offers more details about a verb or another adverb (adverb)  or a noun or pronoun (adjective).

Prepositions form an association- they have to link up with a noun or pronoun to make sentence sense.  When they try to stand alone, they leave readers scratching their heads as they wonder, "By where (or when or what). Adverbs and adjectives need no support from any other part of speech. They are singletons and are proud of their strength to stand alone.

With practice, students can learn to tell the difference between prepositions and prepositional phrases that work together to act like adverbs or adjectives.  Here is an alphabetical list of the most common prepositions from http://grammar.ccc.commnet.edu/grammar/preposition_list.htm. (the Capital Community College Foundation in Hartford, Connecticut).

Using these 55 words, try these exercises:

1. Divide students into groups and give each one an equal (or near equal) number of prepositions. Have them write a sentence for each word  that shows it as: a preposition, an adjective, an adverb and a noun. The key here is that some of these words cannot be used as one or more parts of speech. Students will need to use a grammar book or a dictionary to check the word's usage.

2. Have the class create a round-robin story. Prepare as many index cards, each with one of these 55 words, the way it is to be used in a sentence and a number, as necessary for your class.  Example: behind-preposition #7 or behind-adverb #4. Give each student one of these cards. Next, you write the first sentence of a story and then give the paper to one of your students. This young person  must:


By the next class, make enough copies of the story so all students get one. Individually, each student  must choose five sentences to analyze. For each sentence they are to:


If time remains in class, call on a few students to share one of their A through D responses.

3. The next day in class, show this Prepositions PowerPoint to review this part of speech. The seven-slide show, has the cover, two teaching slides, two practice sides, a quiz and an answer key. Teachers can print out the slides so students can follow at their seats during the visual lesson. The quiz should be kept separate from the rest of the pack, and given after the practice work has been checked. This presentation is aligned with Common Core Standard Language 1 and is FREE.
Teacher Note: You can also start a Prepositions and Prepositional Phrase lesson plan with this PowerPoint.
http://www.teacherspayteachers.com/Product/Grammar-Prepositions-PowerPoint

How do you teach about Prepositions? Share your ideas here. 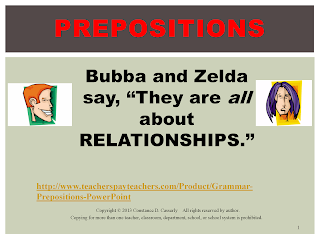 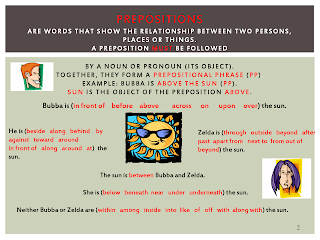 Posted by Connie at 10:43:00 AM
Email ThisBlogThis!Share to TwitterShare to FacebookShare to Pinterest