It's time for 'The Academic Awards for Literature'!


This morning, I was reading The Washington Post's  Book section and saw that The Martian by Andy Weir, The Revenant by Michael Punke and Brooklyn by Colm Toibin all made the top paperback book sales for last week. Why did these titles ring an, "Aha!" bell in my not-quite-caffeinated-enough brain? Because  just this past week, I read their titles on the Academy Award nominations list for Best Motion Picture of 2015.


Other books turned into movies that made the nominations list in that same category as well as others -some in multiple categories- are The Big Short by Michael Lewis, Room by Emma Donahue, Carol - based on The Price of Salt by Patricia Highsmith, The Danish Girl by David Ebershoff, Trumbo by Bruce Cook, 45 Years - based on In Another Country by David Constantine, and Fifty Shades of Grey by E.L. James.

Although many of these books will never be read in the secondary classrooms, some might. The point is- without the original books, these movies never would have been made. This thought made me wonder, "What about literary awards since so many films begin with an already published fiction or non-fiction piece?" 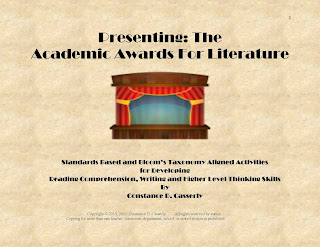 Students would select their choices for The Academic Awards for Literature  from books they either studied as a class or read independently. It doesn't matter if the book they choose has never been made into a film. They have read enough novels and narrative nonfiction and viewed enough movies to form opinions as to which ones earn the label of the Best.

Would they vote for Mockingjay by Suzanne Collins? The Stranger  by Albert Camus? One Flew Over the Cuckoo's Nest by Ken Kesey? The Great Gatsby by F.Scott Fitzgerald, or one of many other solid choices?


For this activity, teachers build on the Academy Awards nominations chatter to hook Middle and High School students' interest as they write about their reading. The Academic Awards for Literature absorbs students’ interest and motivates them to combine their opinions with facts and details from books as they create their awards and defend their choices. 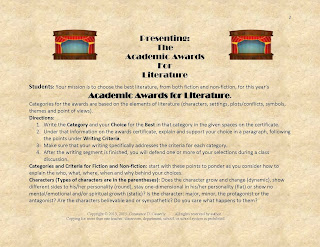 The categories for the awards are based on the elements of literature - Characters, Settings, Plot/Conflicts, Symbols, themes and Point of View.

To complete this lesson, students are required to
1. write the category title and their choice for the Best in that category in the given spaces on the certificate.
2. explain and support each choice in a paragraph on the awards certificate, following the points under Writing Criteria.
3. make sure that their writing specifically addresses the criteria for each category.
4. defend one or more of their selections during a class discussion. 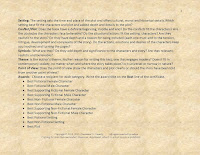 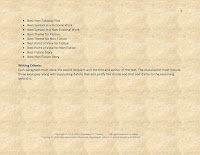 The criteria for Fiction and Non-fiction offers students points to ponder about each element of literature as they consider how to explain the who, what, where, when and why behind their choices. 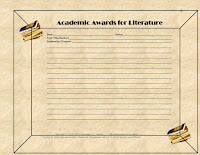 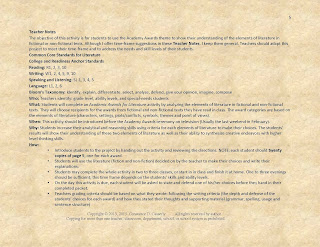 For another engaging activity for books that have been turned into movies, try - https://www.teacherspayteachers.com/Product/Literature-Analysis-Activity-Comparing-Books-and-Movies-32844 ($1.25) 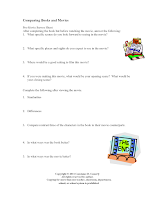 These lessons mesh reading, writing and viewing into activities that are guaranteed to ignite lively discussions where students support their opinions with facts and details. Who knows- someday one of their book choices might be turned into a movie, and they will hear their choice  introduced during the 20_ _ Academy Awards  with the words, "And the winner is...".

Enjoy a Teach It Now Day Every Day.