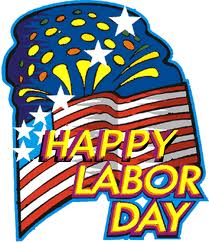 Principal Ben Scroogens tossed his red pen beside the twelve-inch high pile of unread lesson plans as his head flopped onto the stack of the First Day  Motivate Me activities he had demanded each of his 175 teachers turn in for his approval before they left for the three-day Labor Day weekend. “Twenty-five down- 150 more to go before I send my Sunday night Acceptance or Denial e-mails,” he said as a yawn spiraled into the stale air of his locked office.  He rubbed his red-rimmed eyes, his teeth clenching in anger when he thought of the English 12 lesson plan on Friday Night Lights he had just read.

“Once again I see that Rita Rebellie is refusing to be a team member and get with the program. She’s supposed to be teaching The Stranger like the rest of her Professional Learning Community, but, No-o-o, not her. Hah! I can’t wait to see how long she’ll stand her ground against my policies when she realizes that I’ve scheduled her for lunch duty every day.”

He sat up so quickly, he sent his brand new ergonomic leather swivel chair into a spin that ended with the left side of his shaved head smashing into the corner of his faux mahogany filing cabinet. His last thought before he fell into unconsciousness bounced around his brain, “Rita and her friends will just have to miss their barbeques while they revise their plans to meet my guidelines.”

Minutes…or maybe hours later, he had no way of knowing,  Ben awoke amidst a blizzard of papers swirling around his desk and slapping him in the head.  “How could this be?  I keep my windows locked,” he thought.  His eyes slit open just as a pale hand zoomed toward his jaw. His peripheral vision caught a glimpse of another ghostly white hand sending yet another fistful of lesson plans diving toward his head.

“What the heck…” he raised his head onto his left arm in an attempt to push himself upright.

“Wakee uppee Bennie-boy.” A grating squeak not unlike nails on a blackboard rasped his ear drums as cold finders patted his bald pate.

The principal managed to raise his head enough to rest it in his cupped hands that topped his arms, bent so his elbows took the weight. His eyes widened into Os of wonder. ‘You are Carol Whatshername- the Ghost of Christmas Past from…”

“Yeah, yeah, yeah- from Scrooged.  Got that in one, Bennie-boy.”  She yawned and rubbed her fingers over one of her sparkly-red gel nails. “Drat it! These nighttime treks are the nemesis of manicures.”

“Why are you invading my dreams?”

“Oh, hon,” the Carol Ghost visage leaned toward the principal, “you are definitely not dreaming.  See.” She grabbed his left forearm with both hands, twisting each one in a different direction. “I am the Ghost of 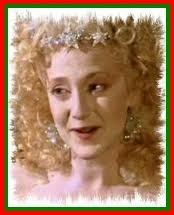 Teachers Past, Present and Future.” She patted his arm. “The economic downturn condensed our job descriptions.”

“Geeze Louise, lady. That hurt.”  As he propelled his chair backwards, Ben caught a look of his trashed office.  The precisely aligned stack of his teachers’ lesson plans now lay in pieces on top, around, under and beside every piece of furniture.  “What the heck did you do that for?”  He flapped his hands at the paper drifts.

“Oh, Ben, Ben, Ben, none of this is your business in the first place.” She picked up a paper labeled Physics and Phenomenology: Time- it might not be Fundamental, and flicked the paper toward the principal. “Didn’t you drop Basic Physics your senior year in high school when you realized that it wasn’t relative for an English Liberal Arts major?”  She giggled at her pun.

Feeling not one iota of humor, he responded, “Yes, but, as the principal, I must keep my finger on the pulse that pumps the learning lifeblood through the students in my care.”

“Ben, you are clogging your teachers’ professional arteries. Just let them teach.”

“But they don’t always know the right way…”

“Whoa there, Bennie-boy. Now that’s a different tune from the one you carried in your classroom days.” She pointed at the TV screen, holding her hand steady until a clear picture appeared.  A young man sporting a light brown comb over and gym trim physique clung to the door of a classroom while twenty-five entranced students followed his every move.  “Hmm, you’re being Gregor the dung beetle in The Metamorphosis again, aren’t you?” Carol the Ghost Teacher’s voice oozed warmth and understanding.

“You should have been teaching subject/verb and pronoun/antecedent agreement that day, though, right?”

The principal’s backbone turned to steel as he straightened up in his chair. His eyes glowed softly, though, as they watched the passion, the fire in his younger self.  “I knew what my students needed! After all, I talked with them, listened to them and dealt with them every day. We’d get to the grammar and everything else on the Program of Study; we always did.”

“So does Rita.” The Teacher Ghost’s pale hands pushed away the wrinkles on the last lesson plan Ben had read.

“But she doesn’t listen! The teachers all have objectives…goals… PLC agendas that they must follow. She is no exception.”

“Sure she is Bennie-boy.” With a flick of her finger, the Teacher Ghost switched the scene on the TV to one where a slightly older Teacher Ben paced in front of the same desk where he now sat. A previous principal, the one he had named the Ice Queen, perched in the principal’s chair.

Ben’s lips moved in sync, remembering the words his younger self spouted as he admonished the elderly administrator to, “… permit the teachers to help their students regain their love for learning by allowing them the freedom to teach what they want, when they want and how they want. “

“Remember your words, Ben, ‘Each teacher is exceptional, just like each child. Just let us teach, and they will learn.’”

“Man, I exuded passion, didn’t I?” Ben shook his head at the memory.

“That you did, Bennie-boy.  That you did.”  Carol fluttered her finger again and the picture changed to the whole staff meeting just that morning. In it, Ben narrated a PowerPoint presentation that jumped from the test-by-test breakdown of the previous spring’s SOL exam results, to slides depicting regimented lesson plan criteria- by department, to samples of data-collecting forms, to the ten ways to contact parents, to the school policies on attendance, tardies, to expected bathroom, hallway and cafeteria behavior and to teachers’ professional duty assignments, i.e hall monitors, bus duty, cafeteria duty and Copy Room assignments. Carol shook her head. “I think you forgot to include the one on goose-stepping.” 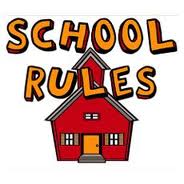 “We need rules, doggone it!” Ben slammed his hand on his desk. “Without them we will have chaos.”

She spun Ben’s chair to face the screen. “Look at your teachers’ expressions! Where is their passion? Their fire? Their hopes and dreams and compassion for their students?” She twirled the chair to face her. “Smashed under your micromanaging fists, that’s where.”

“I know what scores we need from these kids to meet AYP. I know this takes coordination in each department by course and grade level. I know what my teachers need to do so…”

“…so you can remain principal.” The two glared at each other.

Ben ended the glowering contest first.  “I am the principal. And as a professional, I have been deemed worthy of making the hard decisions.”

Carol sighed and pressed the palms of her hands against her temples in frustration until her temper cooled enough that she could speak. “What are your teachers?  Androids?  I thought they were professionals, too.”

“Of course they are. They have to respect my position as their leader, though.”

“Respect is a two-way street, my friend.  And from what I see, you micro-manage; you do not lead,”

She pulled a stapled sheaf of papers from a hidden pocket in her pink and purple skirt. “’Effective principals are just that because they have enough confidence and respect in themselves and their staffs to lead instead of micromanaging every campus-related detail. They understand when to grasp the leadership reins and when to delegate authority to the professionals who surround them.’ Sound familiar?” She held the thesis paper in front of his face so he could read his name.

“Yes, I did write that but that was before I sat in this chair and realized what was at stake here.”

Instead of responding, Carol pointed at the television screen until a quadrant of pictures appeared.  In each one, students filed into a classroom where a teacher sat behind a desk that held a tray labeled: Assignments to be Completed and another for:  Assignments Finished.  Stacks of texts for English, Social Studies, Science or Math or various other high school subjects perched next to the trays, depending on the classroom. On the teacher’s right side was a pile of Standards of Learning exams with an Exam date written in bold black indelible marker on a cover sheet.

As the students shuffled by the desk on their way to their work stations, each with a laptop and printer, they picked up an Assignments to be Completed instruction sheet and a text book. Carol fast-forwarded the tape, but Ben could still see that the students worked for the allotted time, completing any written work on their computers that they sent, to the teacher, he surmised. They also printed out a hard copy of their work which they deposited in the Assignments Finished tray. No conversations, emotions or interaction broke the robotic scenes.

“Welcome, Ben, to the future of this school unless you wise up and smell the rank odor of frustration, low morale and apathy emanating from your staff and students.”

Ben stared at the television, watching his image march from classroom to classroom, ripping down any posters promoting a love for learning and admonishing any teacher talking with a student. They each received some harsh words that he couldn’t understand if they showed even a glimmer of a smile. 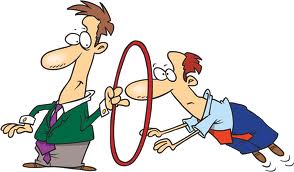 “But what am I to do?  I have criteria that my bosses expect me to follow, too. I have to jump through hoops, too.”

“Work with me here, Ben. You know as well as I do that hoops won’t stay in the air without someone’s help.  Fire up your old passion and add it to your leadership skills. Things don’t have to stay the same. Bring back a love for teaching and learning, Ben.”

“Right here.” Carol deleted the morning’s PowerPoint presentation from the screen and Ben’s hard drive. Next she tossed all of the teachers’ lesson plans into the trash. Finally she brought up Ben’s email, and typed:
“GET FIRED UP!
This year all teachers will follow their department’s Program of Study, but will choose what they want to teach, when they want to teach it and how they want to teach it. You have the knowledge, skills, the professionalism and the passion to ignite your students, your classrooms and these halls with a love and desire for learning.”

Carol flipped the desktop to face Ben. "Now create a list of five to ten behavioral expectations and school rules that you will print out and laminate for all teacher to post in their classrooms.  Finish with a few hearty words, something like, ‘Welcome to a truly New Year. Let the Learning Begin.’”

Ben shook his head, his thin-lipped expression showing his skepticism. “It’s that easy?”

"Yes, Bennie-boy.  It is truly that easy.”
The End
To all of my colleagues starting or preparing to start a new school year, allow me to  paraphrase Tiny Tim, “Happy Labor Day dreams to all, and to all a happy school year.”