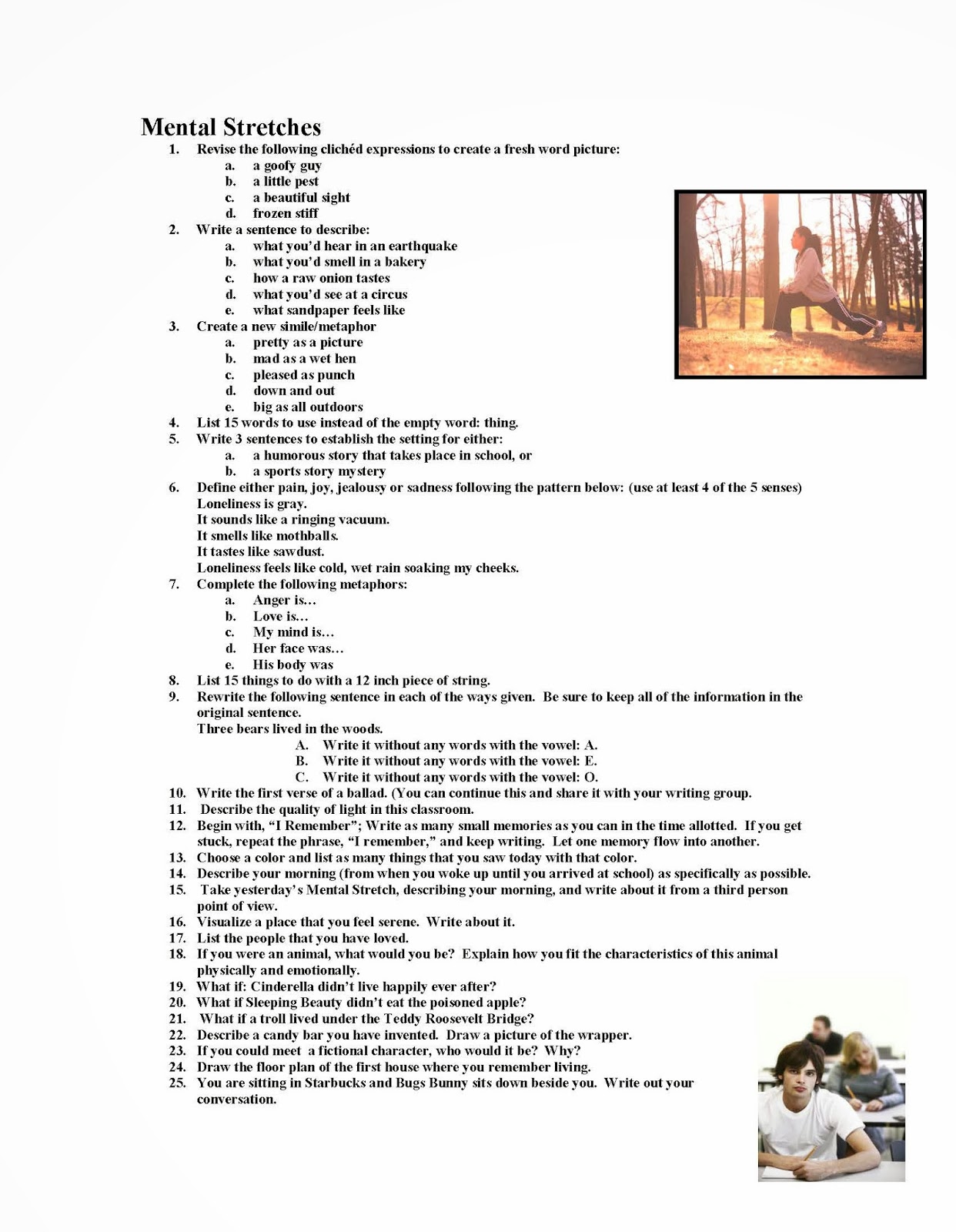 Patrick Henry pleaded for liberty in his Liberty or Death speech, John Proctor demanded, “Leave me my name,” in Arthur Miller’s The Crucible, and contemporary headlines stipulate, “No Negotiation.” Obviously, the voices behind these ultimatums did not suffer from writers’ laryngitis. Unfortunately, in today’s schools and homes, too many students endure this malady because they perceive writing as a chore, a bore, and a punishment.

Watch young children at play. They are imagining, concocting, fantasizing and inventing drama after drama, adventure after adventure, and dialogue after dialogue. Their mental voices as well as their actual ones carry them through their days and their dreams loudly, clearly and without restraint.

Around third grade, teachers and writing standards implement what to write, when to write and how to write, while parents review what and how their offspring have written.  Under siege from all sides of life, children’s writing voices, afflicted with laryngitis, crawl into the beds in their brains. Standardization has bullied their imaginations into submission, allowing this world of possibilities to appear only on demand.

For students, showing writing proficiency on Standards of Learning tests has become the demarcation between loving writing and hating writing. Children who spent their pre-high school years immersed in meeting writing standards now reveal much trepidation about how to write, and even more confusion about what to write.  When I was in the classroom, in each class on the first September school day I would say, “Okay, let’s write for twenty minutes.”

I’d settle into my desk chair, pick up my writing journal and start to fill the page with my thoughts. After about a minute, my skin puckering with that, “I am being watched” sensation, I’d glance up and see about 95% of my students staring at me. When I asked, “Why aren’t you writing?” some brave soul would respond, “Well, what do we write?” as their peers nodded their agreement.  I would smile and chirp, “Whatever you want.” My happiness vanished like a jar of Costco’s Chocolate Caramel Macadamia Nut clusters in my kitchen when my charges met my words with blank stares.

Sadly, I would nod and stand up. I knew that I was facing another group of writers with their imaginations in foreclosure, their writing voices stilled, and their confidence in expressing their thoughts on paper trashed. They had no idea how to choose an idea to explore because they had always been told what to write. This affliction had to be stopped before their brains turned to microchips and their writing voices all sounded like the Garmin lady, “Turn right at the next intersection.”

Over the years, I devised a few antidotes for the I Hate Writing epidemic.  At the beginning of every school year, I presented them to my students.  On Back to School nights, during Touching Base mini-meetings, and in e-mails I shared them with parents.
1. Just Write! Every day, students should spend a minimum of twenty minutes freeing the ideas,
dreams, and passions clamoring at the walls of their hearts by writing. They should not stop to punctuate a sentence, to check spelling or to mine their brains for that perfect word.  Here the only writing rule that they should follow is the one that Sean Connery’s character, William Forrester, avowed in the movie, Finding Forrester, “First write from the heart, and then from the head.”  In later drafts, they will have chance after chance to write from the head as they find that perfect word, convey an idea more clearly, and develop that generality.  At this point, though, they should not stop the flow of ideas, but just write.

2. Own the Writing! When children are permitted to choose their topics and ideas, they are building ownership because they are learning that their ideas have merit. In high school, I suffered from Idea Insignificance when my teachers owned the topic that I had to respond to instead of me.  What if I had no thoughts about or interest in their topic? Maybe I wanted to write about how Mercutio was so alluring that Shakespeare had to kill him off so he wouldn’t overshadow Romeo. Instead, the teacher demanded my response to why Romeo and Juliet were star-crossed lovers. Talk about a chore, a bore and a punishment!
Every writing session shouldn’t be turned into a lesson, either. When a young person asks, “What do I write about for ___(Insert subject)?” the adult that they are speaking to should respond, “What do you want to write about? When the writing calls for a more analytic topic, such as addressing an idea in literature, instead of dictating the choices, teachers and parents can lead a brainstorming session to show the young writers how to formulate their ideas into viable topics. Writing to prescribed prompts alone stifles ownership.

3. Prowess Leads to Proficiency. As students gain courage in choosing their topics, they will develop writing prowess in what they are saying. This confidence leads to stronger writing skills in how they are expressing themselves.  Now is the time for them to, “Write from the head.” At this point, teachers and parents may to use the response to build skills in basic writing format, grammar and mechanics.  When their hearts and heads join forces on the paper, young authors will achieve writing proficiency.
During conferencing, teachers can deal with issues evident in a student’s writing. When the same issue occurs in a number of papers, they can review and teach or reteach the concept, followed by time for the students to revise their writing in their words. At home, parents can review their young person’s writing by circling any spelling, grammatical or writing issues and discussing them together- but never making the revisions.  By the high school years, teens might not want to share their writing. Parents should make it clear that they respect this autonomy, but that they are available if their young person needs some help or clarification.

4. Read, Read, Read. What does this have to do with writing? Reading forms the building blocks on which writing will flourish. Simply, the more people read, the better they will write because while they are reading, they are deciding what styles they would like to emulate, formulating responses to ideas that they encounter, and opening their minds to thoughts that they want to articulate.

5. Express Yourself! Just like people develop individual fashion sense, they also form their own writing styles. Word choice, sentence structures, and the length of the piece are how they express their writing personalities. This is what is meant by Voice. For example, I have always admired minimalist writers. It amazes me how they can clearly and succinctly paint word pictures in so few sentences.  No one will ever describe my style as minimalist.

Think of this like a verbal “Say It” game that mirrors the “Name That Tune” concept. Some writers can Say it in three paragraphs… others in 33. Some writers create extended metaphors; others choose a specific but terse style. You say, “Tomato,” and I say, “A juicy, crimson orb.” As teachers and parents, we will come across writing voices that might grate on our nerves.  So what? Maybe ours cause the gnashing of teeth. These emotional responses are a reflection of the writer’s Voice.

Will young people turn their writing animosity into a love fest when the adults in their lives utilize these antidotes? Maybe…maybe not.

Will these antidotes cure writing laryngitis? Maybe…maybe not.

Will these antidotes keep students from thinking of writing as a chore, a bore and a punishment?  Quite possibly.

They’re worth a shot,though… aren’t they?

Download this product that will put a stop to Idea Vacuums and that will spark students' desire to write  http://www.teacherspayteachers.com/Product/Writing-Warmups-Mental-Stretches-19032
What do you do to keep students loving writing? Please share your ideas here.