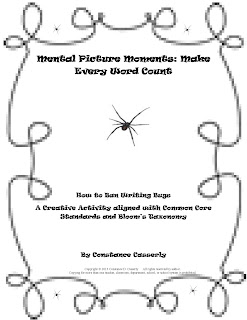 Writing that includes generalities instead of be-Be-BEING Specific bugs me. That's why I created this activity based on bugs- a cockroach- to be exact. Students don't know this, though.

I copied the poem, "Roaches", by Peter Wild, replacing specific nouns, strong adjectives and vivid verbs with weak, bland words. I titled the poem, "Bugs." Students are to rewrite the poem turning my foggy word picture into a one as sensory-explosive as the original, or even more captivating. Because they won't see Peter Wild's poem until they have finished theirs, they will need to stretch their ability to create word pictures as much as they can.

To accomplish this, they must consider the following when creating their Mental Picture Moment:
1. Replace all general nouns with specific ones. Example: cardinal for bird. 2. Replace all vague verbs with vivid ones that show emotion as well as action. Example: strutted for walked.  3. Appeal to the reader’s sense of sight, smell, taste, touch and hearing. Example: crunch for chew. 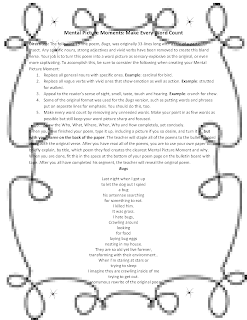 4. See that some of the format used for the Bugs version, such as putting words and phrases on separate lines gives emphasis to specific thoughts. They should do this, too.
5. Make every word count by removing any unneeded words. Students should make their point in as few words as possible but still keep their word picture sharp and focused.
6. Show the Who, What, Where, When, Why and How completely, yet concisely.

When they have finished their poems, they must write their final draft in the space given, and include a picture if they so desire. Then they turn in their piece, but with their name on the back of the paper.

You will staple all of the poems to the bulletin board along with the original verse. After they have read all of the poems, the students are to use their own paper to briefly explain, by title, which poem they feel creates the clearest Mental Picture Moment and why. When they are done, they should fit it into the space at the bottom of their poem page on the bulletin board with tape.

When they have completed this segment, you may reveal the original poem.
This activity will help students to get the bugs out of their writing by being specific and appealing to readers' emotions instead of hiding their thoughts in the dark crevices of their minds. 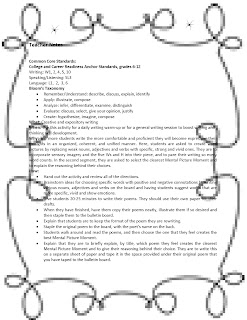 Download this FREE creative writing activity that is aligned with Common Core Standards and Bloom's Taxonomy from: http://www.teacherspayteachers.com/Product/Activity-Mental-Picture-Moment-Make-Every-Word-Count-736923

Take the sting out of reading student writing that is much too general.  Help your charges choose specific words that will focus their thoughts and make every word count and lure readers in by appealing to their emotions.